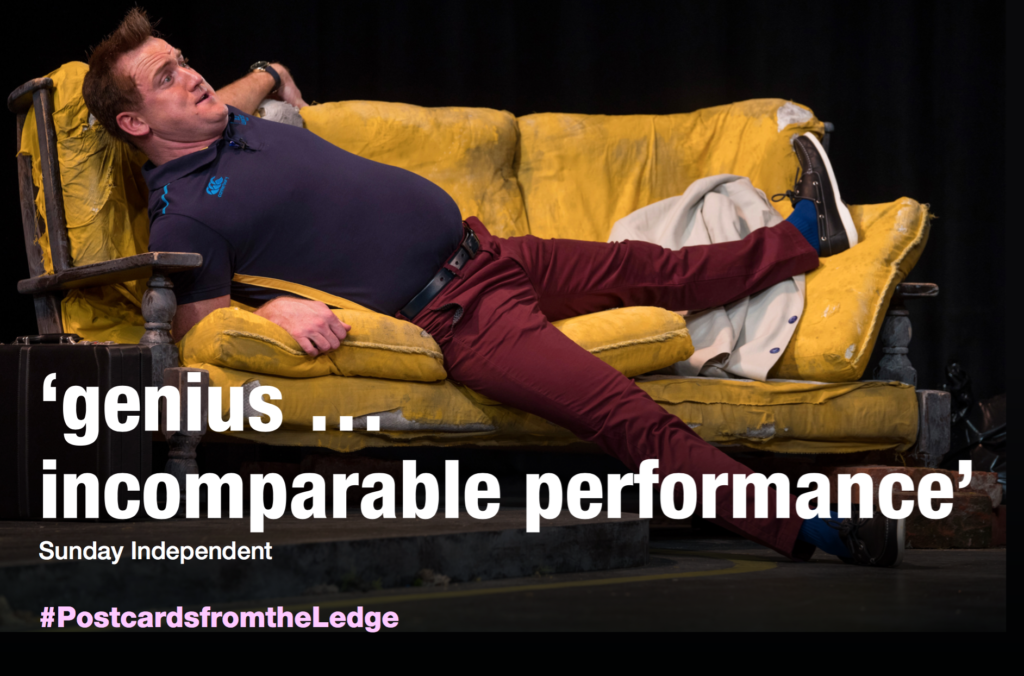 Having played to rave reviews and standing ovations at the Gaiety Theatre, Postcards from the Ledge, starring the ‘incomparable’ Rory Nolan as Ross, is going on tour across Ireland due to phenomenal public demand.

Acclaimed as ‘Ireland’s answer to Homer Simpson’ (Irish Independent) and ‘a comic icon to compare with Alan Partridge or Adrian Mole’ (Sunday Business Post), this is the very first time that Ross O’Carroll-Kelly is bringing any of his stage plays on a full nationwide tour.  With dates announced for Dun Laoghaire, Limerick, Galway and Cork for February 2019, Ross O’Carroll-Kelly is taking his rightful place in the spotlight once again!

Speaking about the Irish tour, Ross O’Carroll-Kelly said:  “I have to tell you that the Rossmeister General is excited in a big-time way to be bringing my act to Cork and Limerick in the New Year. These are heady times indeed for the people of Munster. They’ve got Joey Corbery, they’ve got Donnybrook Fair – and now they’re getting me! It’s great to be going to Galway, too, as it’s rare that people on that side of the world get to see a world class rugby player up close! And what can I say about Dun Laoghaire? Home of the haves and the have-yachts. The Lambo is fully fuelled and read to drive. I just can’t wait.”

Directed by Irish Times Theatre Award winner Jimmy Fay, the show stars the award-winning Rory Nolan, who has played Ross since his stage incarnation over the past decade.

Postcards from the Ledge is the fourth Ross O’Carroll-Kelly stage play, following the hugely successful trilogy of Breaking Dad (which played at the Gaiety to sell-out audiences an unprecedented three times in 2014, 2015 and 2016), Between Foxrock and a Hard Place (2010-2011) and The Last Days of the Celtic Tiger – famously written before the crash, in 2007.

Paul Howard’s character Ross O’Carroll-Kelly started life in a newspaper column almost twenty years ago. He has since become the star of a critically acclaimed series of books that satirised Ireland during the years of its economic boom and bust and have sold well over one million copies in Ireland alone. He was named Irish Newspaper Columnist of the Year in 2013 for his weekly column in The Irish Times, one of the most widely read in the newspaper, and has received a record three Irish Book Awards.